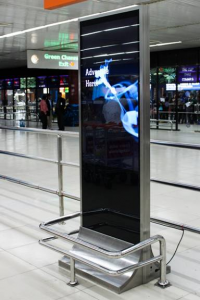 That airport, serving over 6 million passengers every year (more than half of the country’s total arrivals and departures) is an incredibly important location for advertising in the region.

Infinity Corporation, the advertising contract holder, first saw ‘The Wafer’ at #ScreenMediaExpo back in 2010) as we did.

Rezwanul Quayum, Managing Director told us “With its tiny footprint and sleek design this product was the obvious choice for a busy airport like ours and judging by the response from advertisers, it won’t be long before we install some more. The team from Esprit came over and worked with our electricians to complete an excellent job.”

Peter Livesey, Esprit Digital MD added “The Wafer caught the imagination of the industry when it was launched last year and it quickly appeared on several airport and shopping mall tenders. We were delighted when Infinity chose it for the screen network at Dhaka. Large-format portrait pods are doing really well in airports all over the world, showing significant ROI wherever they are deployed and Bangladesh has been no exception”

This entry was posted on Thursday, May 26th, 2011 at 10:59 @499 and is filed under DailyDOOH Update. You can follow any responses to this entry through the RSS 2.0 feed. You can leave a response, or trackback from your own site.