Lots and lots of digital activity in London this week ahead of this weekend’s UEFA Champions League football match at Wembley.

Heineken has been the official sponsor for the UEFA Champions League for the last six years and we particularly liked the creative on the Torch (shown below) ‘Transparency is beautiful if you have nothing to hide‘. 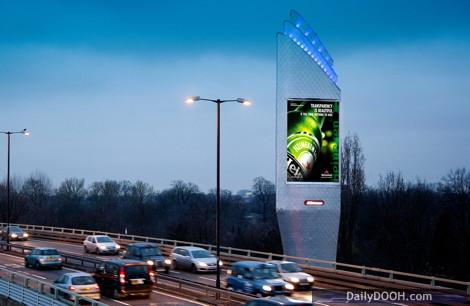 The campaign was booked with JCDecaux through Kinetic and MediaVest and includes high-profile digital (JCDecaux’s Torch, PrimeTime roadside digital and Transvision digital screens in rail stations) and Première sites.

This entry was posted on Thursday, May 26th, 2011 at 11:30 @521 and is filed under Scuttlebut. You can follow any responses to this entry through the RSS 2.0 feed. You can leave a response, or trackback from your own site.