We’re a little late with this news but noticed when combing through the numerous messages that came in during my recent travels that, earlier this month, OMD’s Toronto office won the 2nd annual Adlympics presented by CODACAN, the Canadian association for the digital-out-of-home industry.

And it certainly shows that Canadians aren’t as laid back as their reputation belies. 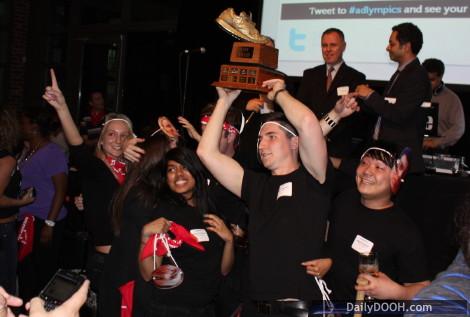 The fun competition pitted Toronto agencies in both brain and body. The winners captured the ‘prestigious’ CODY Award, with each member of the winning team taking home a 32” LCD screen generously donated by LG Electronics, while the agency got a credit for $100,000 in Digital-out-of-Home bucks from CODACAN member networks.

Agency teams with coordinated costumes, such as bright purple wigs and Mexican wrestling outfits, began arriving early in the evening, proving that the spirit created during last year’s event won by Rogers had continued to grow. Agency teams showed up with game faces on, ready to compete in Twister, Relay Races, and touch-screen memory and trivia games educating the players on DOOH. The crowds were loud as cheers and heckles from onlookers rang through the night air.

OMD dominated the leader board with a whopping 6,625 points! The agency indicated that it would be using the DOOH to their charity of choice: Ronald McDonald House. OMD team captain Mike Cortiula said that OMD chose to support RMHC, which is a great organization that really supports families and children at times when they need it most.

Aim of the competition is to build awareness of DOOH among agencies via an annual fun evening. A sister event is soon planned to take place in Montreal.

This entry was posted on Tuesday, May 31st, 2011 at 09:58 @457 and is filed under DailyDOOH Update. You can follow any responses to this entry through the RSS 2.0 feed. You can leave a response, or trackback from your own site.