CastNET is showing what is believed to be the first fully integrated Visual Emergency Notification System, combining digital signage, texting and email. 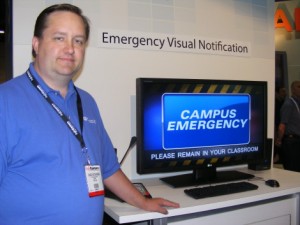 Integrated with Bosch and built on the Scala platform, the VENS allows, with the flip of a preprogrammed switch, all screens to carry a message of the emergency, routes of escape or similar details (eg. Fire in North Tower, take stairway B, or Tornado Warning, Take Cover), as well as page, text or email messages to go to subscribed individuals. For instance, parents of kids on campus could also get the alert or students themselves via email or text.

First deployment will be in August in three new schools in the St. Louis County Schools of Minnesota.

The new building code is expected to be integrated into law across the U.S. in 2012. It will incorporate not only fire alarm systems but also other life-safety systems and functions.

“This already available in Europe and successfully integrated by Bosch so it was our first choice as a partner,” says Hutchinson.

DDG, Edina, Minn., was founded in 1970 and has worked in digital signage since 1992. It has over 5,000 customers with more than 12,000 media players deployed. About 40% of its customers are in gaming including major casinos; 25% in corportate commnications, 25% in government and education, and 10% in retail including one of the Top Five banks. The company has two divisions: A/V integration and the software division (CastNET).

This entry was posted on Wednesday, June 15th, 2011 at 17:59 @791 and is filed under DailyDOOH Update. You can follow any responses to this entry through the RSS 2.0 feed. You can leave a response, or trackback from your own site.