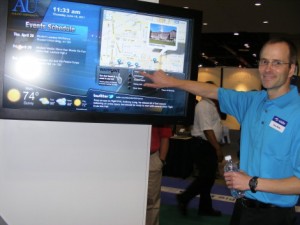 Customers can design their own content using the Visix interface. Visix also has a new digital signage player that works with Announce and supports full screen animation for templates and wallpapers. The customer must buy both the server software and player software from Visix. The player application costs about $1,000 and the server application about$8,000.

Trey Hicks, vice-president sales for Visix, also showed us the company’s new interactive wayfinder, and told us about Visix’ package that makes it easy to get into wayfinding, and can later be upgraded if required.

Visix products are seen in 700 colleges and universities including Yale, MIT. Harvard and University of Southern Forida.

This entry was posted on Tuesday, June 21st, 2011 at 10:00 @458 and is filed under Scuttlebut. You can follow any responses to this entry through the RSS 2.0 feed. You can leave a response, or trackback from your own site.