Clear Channel’s Create + Collaboration team in the UK has launched a new interactive screen network in what they say “harnesses the latest advances in digital technology”. 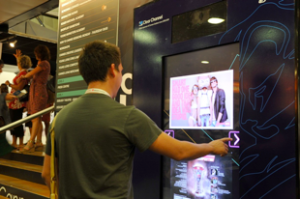 Unveiled at the Cannes Lions International Festival of Creativity this week, the screens are multi-touch sensitive and capable of motion sensing, gesture perception, face detection, colour recognition and augmented reality.

Clear Channel’s research and development team has been busy working with its technology partners; Tangibal, C-Instore and i-FX Media on what sounds and looks like a digital poster on steroids.

Unfortunately so many of these press releases talking up the ‘latest advances in digital technology‘ are merely showcasing a single technology demonstration (in this case one at the Cannes event) aimed at exciting advertisers for a short while and aimed squarely as a defensive measure at those in the industry who are really innovating with digital (and deploying).

The screens we are told, incorporate 12 point multi-touch, HD cameras, movement sensors, infrared technology, 3G comms and eye-tracking software† to enable advertisers to book campaigns that allow people to not only view live content but control the content and star in the ads.

According to Derek Manns, Head of Create + Collaboration at Clear Channel UK “What we have created is the most advanced interactive 6-sheet which uses technology to deliver memorable experiences for consumers while they are out and about”

He added “Out-of-home provides advertisers with a vital link between the on and offline worlds and we are dedicated to delivering innovative products that push the boundaries of our medium.”.

However, what the two showcase screens at Cannes actually delivered was hardly ground breaking…

No doubt we are missing something but if that is all that one of the big five OOH folks can come up with we are seriously underwhelmed.

This entry was posted on Wednesday, June 22nd, 2011 at 07:03 @335 and is filed under DailyDOOH Update. You can follow any responses to this entry through the RSS 2.0 feed. You can leave a response, or trackback from your own site.