Clear Channel Outdoor and the Federal Bureau of Investigation, along with the Electronic Tracking System and the local police departments, will be in Phoenix on Tuesday, June 28, to unveil a set of 35 digital billboards that highlight wanted bank robbers on BanditTrackerArizona.com. 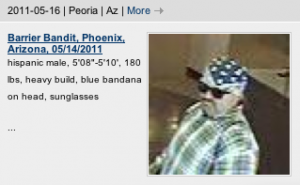 Remind you of anyone in our industry?

Since 2007, Clear Channel Outdoor and the FBI have worked together to form a partnership that would take advantage of the new digital outdoor networks ability to react to local conditions quickly and inform the public of important community information.

Once the boards go live on Tuesday, the creative of the FBI Bandit Tracker Web site will be running on all 35 digital displays in Phoenix, with four more boards that will be added in July.

The digital boards have 17.5 million impressions per week with roughly 2.1 million per day.

The digital billboards, provided by Clear Channel Outdoor as a public service, will serve to expand the public’s awareness of BanditTrackerArizona.com and the rewards associated with identifying bank robbery suspects.

This entry was posted on Monday, June 27th, 2011 at 10:00 @458 and is filed under DailyDOOH Update. You can follow any responses to this entry through the RSS 2.0 feed. You can leave a response, or trackback from your own site.