Putting a flat screen in a shop window (with or without interactivity and with or without AR) is hardly earth shattering, far from being ‘anything to do with the future’ and will unlikely increase footfall into said shop by very much so when Hidden Creative‘s publicist asked the day before #mwl2011 proper on twitter “Do you want to see the shop window of the future?” and then proceeded to show exhibit (a)† we were rather disappointed if not totally surprised.

After all we often hear so called ‘leading augmented reality and computer vision specialists” demonstrate no knowledge or indeed any common sense whatsoever about retail (or other sectors that they try to sell into). 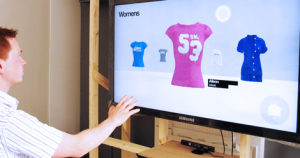 Exhibit (a) a rather uninspiring window display

Our industry will always have a problem when (i) industry ‘veterans’ prefer to debate the merits of a name than do anything useful like demonstrate what could and should be done with our technology and (ii) folks who perhaps should know better continue to demonstrate a fundamental lack of understanding of the retail ecosystem.

Window dressers or visual merchandising specialists go to great lengths to attract the passer by. Let’s face facts and admit that it’s rare for anything as conventional as a flat LCD / Plasma display to be able to do that (especially on its own and especially when placed direct onto the glass window). 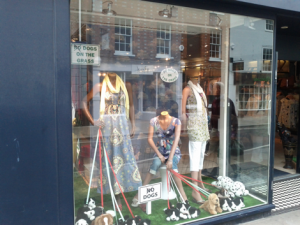 Exhibit (b) Made you look, made you stare, made you lose your underwear

In exhibit (b) there is not a screen in sight but the display is appealing, humorous and works on many levels.

Almost all shop windows of course work in three dimensions, they have depth from the window itself into the store and so screens that are worked into mini works of art like this are much more likely to be effective and be adopted by the window dressing fraternity than a flat panel screen stuck (in two dimensions) on the window store front.

It’s about time that so called creative folks who want to sell into this space figured out how to better put our technology in context.

† Exhibit (a) is Hidden Creative‘s new Gesture Controlled Window Display aimed at delivering interactive onscreen content and promotions to shoppers that customers can control by using hand and body gestures. The experience is displayed on screen or projected directly onto windows and is designed to create interaction with consumers through shop-front windows. It was on display at #mwl2011 in London recently

This entry was posted on Tuesday, July 5th, 2011 at 06:16 @303 and is filed under DailyDOOH Update. You can follow any responses to this entry through the RSS 2.0 feed. You can leave a response, or trackback from your own site.