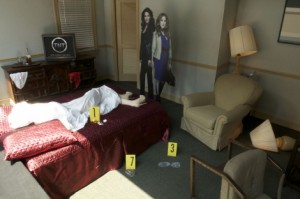 The series, starring Angie Harmon and Sasha Alexander, will launch its second season July 11 at 10 p.m. ET/PT on TNT.

As consumers walk by the 100’ display, they see a three-dimensional crime scene through the windows of the storefront. The detailed build-out features a taped-off crime scene filled with an array of evidence, as well as a sheeted corpse in the center of the scene. 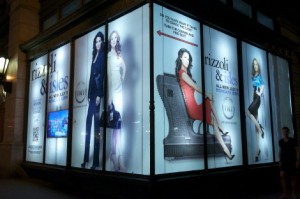 An interactive video wall serves as the investigation headquarters, allowing consumers to dust for fingerprints, survey the scene of the crime, review DNA tests and view an autopsy report. Using state-of-the-art Touch Interactive Technology, pedestrians also learn about the motives and whereabouts of three potential suspects and ultimately solve the crime.

Once the crime is solved, users are awarded with a photo of themselves with the stars of Rizzoli & Isles, which is then displayed on the storefront window. From the shop window, consumers then have the ability to share their photos with friends via Facebook. 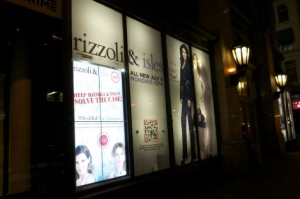 “This is truly a one-of-a-kind experience,” says Josh Cohen, president and CEO of Pearl Media. “We are constantly being challenged by our clients to think differently and bring them customized opportunities to stand out in our competitive media world. Taking the physical element of a crime scene build out and tying it to an interactive experience has never been done before. This concept differentiates the brand from the rest of the field, and we are honored to work with TNT to bring it to life in such a significant way.”

Pearl Media’s interactive installation incorporates many technologies and capabilities including what is believed to be the first-ever NFC Mobile Interactivity-enabled storefront. This technology allows pedestrians to place their phone near an identifying marker on the storefront that will immediately immerse the person’s mobile phone into the experience – thus providing incremental value and data to clients and consumers.

The promotion is running for the month of July.

This entry was posted on Wednesday, July 6th, 2011 at 06:06 @296 and is filed under DailyDOOH Update. You can follow any responses to this entry through the RSS 2.0 feed. You can leave a response, or trackback from your own site.