We first announced that Akoo International would be moving back in May, and now that the global media and technology innovator has settled into its newly developed global headquarters at 5600 N. River Road in Rosemont, Illinois (a half mile from Chicago’s O’Hare International airport, we’ve received some nice photos of the new corporate headquarters. 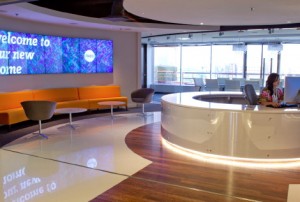 Akoo’s new 25,000 square foot facility occupies the entire ninth floor of a Class A commercial building. The space was envisioned by Niko Drakoulis, CEO, with the support of an in-house team led by Yanni Lolis, chief creative officer, and Brett Casey, design director. While we didn’t get a photo of the master cintrol room, it sounds awesome.

The space was designed to meet the needs of the rapidly growing company, which develops interactive technology and operates a leading television network, recently rated by Nielsen as the largest average minute audience of any digital out-of-home network reporting age 12+. 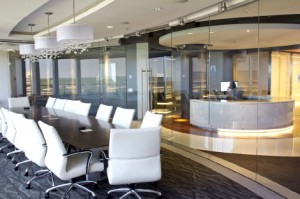 Akoo’s television network is available throughout the U.S. in 161 ‘Akoo Pavilions’ , which attract 64 million consumers each month in the highly trafficked food courts in the nation’s premier shopping malls. To maximize engagement, the company’s patented interactive technology enables viewers to make on-demand entertainment content requests via their personal mobile devices and tablets. 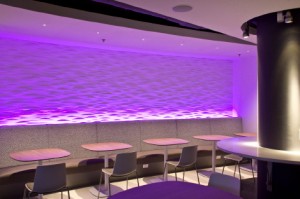 The new headquarters include a master control room for monitoring Akoo’s television network across more than 60 top U.S. markets; an in-house video production facility; a full recording studio; a research and development laboratory; an executive board room; an ‘Akoo Café’; and office space to accommodate employee growth.

The Company also plans to incorporate a Living Room of the Future showcase to demonstrate its newest interactive technologies for partners, brand advertisers, and agencies.

The Company’s interactive technology has been awarded patents in several major global markets, including the U.S. and China. With a proven and patented technology platform and its new quarters, the Company is now committed to delivering the next generation of in-home on-demand television experiences – by integrating its technology with set-top boxes, media servers, game consoles, and TV apps.

This entry was posted on Thursday, August 11th, 2011 at 09:59 @457 and is filed under DailyDOOH Update. You can follow any responses to this entry through the RSS 2.0 feed. You can leave a response, or trackback from your own site.