ESPN UK Kicks Off A First On Digital Screens 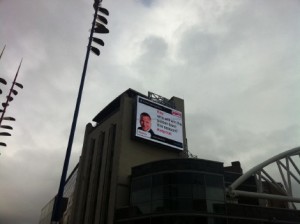 The goal is to engage football fans nationwide, on the move. The campaign is part of ESPN’s new season ad campaign ‘Miss Nothing’, which promotes the range and value of ESPN’s sporting content available to fans on multiple platforms and devices. This includes ESPN Goals, the sports media company’s new, free, enhanced mobile app.

The four week campaign timed specifically around the start of the football and rugby seasons in the UK, promoting ESPN’s coverage of both as well as the broader range and value of sport on ESPN.

“Sports fans aren’t passive viewers,” says Mike McKibbin, group marketing director, ESPN Europe, the Middle East and Africa. “We want to connect with fans, on whatever screens they use, at any time. Through our brand building campaign, ‘The Gift’, we aim to demonstrate our understanding of fans, their passion and insight. Our new digital outdoor campaign aims to actively engage fans and continue our dialogue with them from TV screen, mobile device and online to wherever they are as the sporting weekend unfolds.” 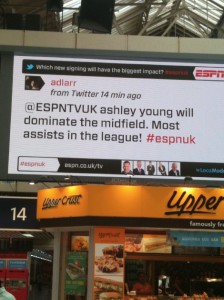 The creative displayed on digital outdoor screens will consist of a number of stills, including: questions posed by ESPN’s football presenters; responses to these questions from the public; integration of social media input from fans; and creative promoting either ESPN Goals or promoting ESPN’s live TV coverage of the Barclays Premier League.

Ahead of each weekend, Stubbs and Keegan will pose questions or raise subjects for debate around upcoming football matches and action, and, as the matches themselves unfold on Saturdays, the ESPN team will comment and raise questions for debate around the action. Each question or topic of discussion will be live on digital outdoor screens for up to 20 seconds before a fresh question for discussion and debate goes live.

Additionally, live scores from ESPNsoccernet.com, the sports media company’s football news and information site, will be included in the digital outdoor feeds, as well as information around ESPN’s live televised football matches. Furthering the integration aspect of the campaign, the real time debate on social media will be broadcast live through online display advertising and simultaneously across 300 digital outdoor sites. 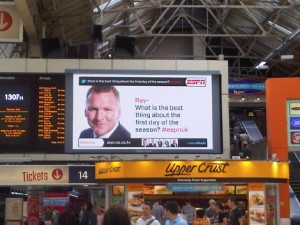 We asked if QR codes were part of the campaign and were told by an ESPN spokesperson, “We are not using QR codes on outdoor at this stage. However, we continue to implement – and explore – innovative and engaging ways to market ESPN Goals, including the recent use of QR codes with a consumer leafleting promotion earlier this month to help promote our new ESPN Goals app.”

The campaign will feature on a number of digital outdoor sites nationwide including London, Glasgow and Manchester and using a range of formats such as Media Walls, Rail D6s and Transvision in national rail, roadside, Underground and retail environments. It will also include the Media Wall in Liverpool, one of the biggest single outdoor sites in the country.

The campaign will outdoor screens from many UK outdoor media owners, booked via Arena Media, ESPN’s media planning and buying agency, along with Posterscope. 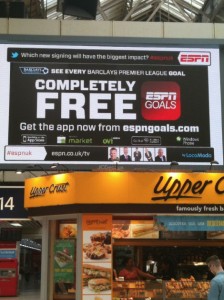 The screens used in the digital outdoor engagement campaign will run the creative at different times of day, and at various rotations, switching between the ESPN campaign and various campaigns from third parties. ie. ESPN isn’t road-blocking the screens for the entire duration of the weekend.

Further cementing ESPN’s connection with sports fans, the campaign will promote ESPN Goals. This app lets football fans catch all the goals from action from every Barclays Premier League match – within just minutes of it taking place – for free. ESPN Goals is available at no cost to football fans via Apple iTunes, Android Market, Nokia’s OVI Store, the Blackberry App World, and Windows Phone.

The campaign was the result of collaboration between McKibbin; Alex Lowe, associate marketing director, ESPN EMEA; Alex May and Adam Hancox, from Arena Media; Sarah Bucknell at Posterscope; and Susan Dalton at Loca Moda.

This entry was posted on Friday, August 19th, 2011 at 00:01 @042 and is filed under DailyDOOH Update. You can follow any responses to this entry through the RSS 2.0 feed. You can leave a response, or trackback from your own site.