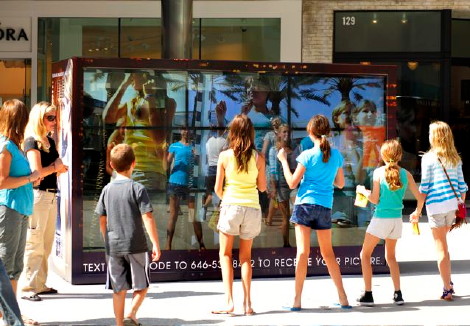 The campaign is running in Santa Monica and at 222 Park Avenue South in NYC. When people approach the display, they see a duplicate of themselves trailing closely behind. Using their arms, the users have the option of having the display take a still picture or a video of themselves and their doppelganger. They then can have it sent to them via email for posting on their Facebook pages.

The campaign is running for four weeks. The network worked with Omnicom Group’s OMD to create the experience.

CW is inviting users to accept future messages from the network, but without this opt-in permission, CW will not retain their contact information.

This entry was posted on Thursday, August 25th, 2011 at 10:01 @459 and is filed under DailyDOOH Update. You can follow any responses to this entry through the RSS 2.0 feed. You can leave a response, or trackback from your own site.