Ocean Outdoor, the boutique media owner which specialises in iconic landmark, premium digital and super-premium banner locations, has won the contract for ExCeL London for the period of the London Olympics 2012. 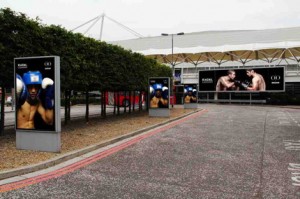 This iconic Olympic location, which was not included in the original LOCOG auction, has now been made available to all Tier one and Tier two partners, as it is classed as a prime vicinity venue.

Tim Bleakley, Chief Executive of Ocean Outdoor told us “This is a fantastic addition to London’s advertising portfolio during the 2012 Games and will offer one of the sponsors a superb opportunity to target the Olympics and Paralympics. Ocean is delighted to confirm the addition of ExCeL to its iconic landmark portfolio during this key period,”

As part of Ocean Outdoor’s iconic landmark collection, ExCeL will offer one advertiser the opportunity for a solus presence on key exterior sites around the entrance to the international exhibition and convention centre during the entire 12 week period of the Olympics and Paralympics.

During the Olympic Games, the five arenas that make up the extensive ExCeL campus in London’s Royal Docklands, will host 165 sessions across a wide range of popular spectator sports, including boxing, table tennis, judo, fencing and weightlifting.

These events are set to attract an estimated one million spectators to ExCeL during the period of the Olympics (July 27 to August 12) and the Paralympics (August 29 to September 9).

This entry was posted on Thursday, September 8th, 2011 at 11:28 @519 and is filed under DailyDOOH Update. You can follow any responses to this entry through the RSS 2.0 feed. You can leave a response, or trackback from your own site.