Three companies who work with Scala were given awards Wednesday evening during a dinner hosted by HP during the International Scala Conference being held in Noordwijkerhout, The Netherlands. 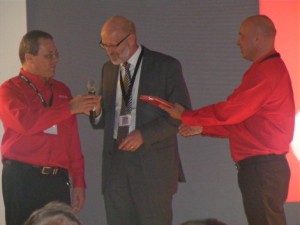 Taking the award for the Most Players Deployed between July, 2010, and July, 2011, was Seen Media, Germany, which deployed 5,000 players during the period.

Winning for being the Best Performing Newcomer in 2010-2011 was DOBIT, Belgium and The Netherlands, seen here accepting the award.

The third award was presented to the company gaining the Most New Customers in the 2010-11 period. It went to JBTec Digital Signage, Brazil.

This entry was posted on Thursday, September 15th, 2011 at 07:01 @334 and is filed under DailyDOOH Update. You can follow any responses to this entry through the RSS 2.0 feed. You can leave a response, or trackback from your own site.