Gerard Bucas, outgoing CEO for Scala, was accorded a standing ovation Wednesday evening following a moving tribute accorded him by Andreas Augland of Norway, one of Scala’s earliest investors. 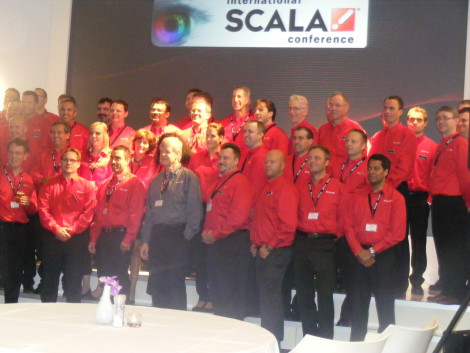 Bucas was credited as having saved Scala from bankruptcy when he joined the company in July, 2002. At the time, the company had 28 employees. Today, it is one of the most successful companies in the digital out-of-home industry with an enormous global presence worldwide.

Earlier in the evening, Bucas was photographed with the 47 Scala employees attending the International Scala Conference being held in Noordwijkerhout, The Netherlands.

This entry was posted on Thursday, September 15th, 2011 at 08:00 @375 and is filed under Scuttlebut. You can follow any responses to this entry through the RSS 2.0 feed. You can leave a response, or trackback from your own site.