Someone we’re really looking forward to hearing at the Strategy Institute’s Digital Signage Investor Conference is Dirk Hülsermann in his capacity as the recently re-elected president of OVAB Europe. 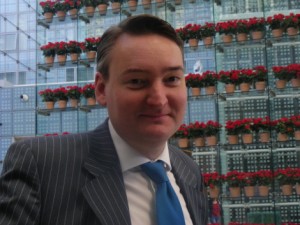 Hülsermann, whose day job is as manager DOOH Solutions – VUKUNET/ADVUKU, NEC Display Solutions EMEA, is someone we meet at practically all the major conferences worldwide, and know that he has a good handle on the issues, opportunities and current realities of the European versus the American markets.

“I will be speaking in my capacity as OVAB Europe president about the European Digital Out-of-Home market and where the differences lie between Europe and the U.S.,” says Hülsermann.

“One of the major differences is that some of the European markets are dominated by a few players, while it seems that the North American market is more heterogeneous. Another is that European players (media owners as well as agencies) are keen to save costs by simplifying the campaign process and are making a lot of efforts to get that done.”

Hülsermann will be speaking just before lunch on Day 2, and we expect that his ideas on the trends and challenges in the markets will generate interesting questions as well as provide food for thought for those trying to penetrate and/or grow in both markets.

This entry was posted on Wednesday, October 5th, 2011 at 07:00 @333 and is filed under DailyDOOH Update. You can follow any responses to this entry through the RSS 2.0 feed. You can leave a response, or trackback from your own site.