British Gas has worked with Posterscope and Carat to create a 360-degree wrap that capitalises on all the attributes of City Gateway Media‘s Manchester Tower screen. 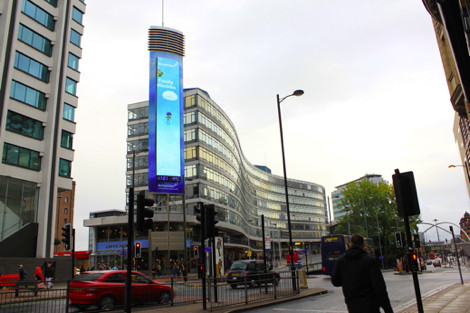 Carat’s James Hyams told us “The 360 degree wrap allowed us to demonstrate visually the campaign idea of ‘Our Cover, Covers More’ perfectly and the height of the screen worked brilliantly with the creative to show the British Gas engineers parachuting down from the sky above.”

With 100% share of screen, it has been designed to maximise the Skyscraper and dominate the Manchester cityscape.

This entry was posted on Wednesday, October 12th, 2011 at 12:47 @574 and is filed under Scuttlebut. You can follow any responses to this entry through the RSS 2.0 feed. You can leave a response, or trackback from your own site.