While in New York last week, we had the opportunity to meet with Mort Aaronson, chairman and CEO of PlaceWise Media which officially made its Shoptopia known to advertisers attending the Digital Place-based Advertising Association’s Digital Signage Summit. 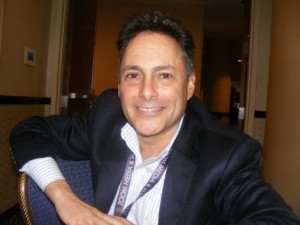 “Whereas everyone with screens is talking about how they must be integrated with So-Lo-Mo (social-location-mobile), Shoptopia offers the So-Lo-Mo,” says Aaronson. “We don’t have our own screens. We can wrap around or integrate with other network’s screens.

“We’re already in 55 markets including 34 of the top DMAs in the U.S., in, eg., Forest City, Glimcher Realty Trust shopping centers, and Madison Marquette malls. We hope to serve others that already have screens. And we’re going to be testing having our own screens in 10 malls in January and February, 2012, using facial recognition.”

“We reach shoppers before they go shopping, interact with them while they are shopping and after their shopping experience, using online, mobile, social and on-premises techniques.”

With Shoptopia, all touchpoints are used to engage and interact with customers. Their path to purchase includes:

Shoptopia has its own content management system working with the malls’ websites and mobile, making, says Aaronson, 30,000-to-40,000 content changes monthly.

The company can geo-target for regions, can target specific age groups or even specific markets such as Hispanics.

“We were already working with malls for web sites and on-premise but with developing Shoptopia, we’re using the digital experience to enhance the physical one,” says Aaronson.

“What we do is measurable, scalable and customizable. The networks we’re already in cover 38 million people and we want to continue to grow both with them and externally. We’re already talking to some real estate associations in Canada as well.”

placewise was known as the Mall Finder Network since its founding in 1998, but changed its name this year to better attach everyone into its so/lo/mo network.

“We have the reach of broadcast, the integration of digital media, and pricing similar to Internet advertising,” says Aaronson.

“We expect to get really rolling in the pre-Christmas period,” Aaronson says. “We’ll be using a five-piece teaser campaign including a media guide to agencies. And, of course, will be talking to malls that already have screens on how we can be integrated with them.”

This entry was posted on Wednesday, October 26th, 2011 at 08:51 @410 and is filed under DailyDOOH Update. You can follow any responses to this entry through the RSS 2.0 feed. You can leave a response, or trackback from your own site.