Coke Says It’s Getting Ready For The Olympics…

As the Christmas lights are switched on in London, the digital signage in the most popular gathering point of the capital are switched off. Both Coca Cola and Samsung have covered their LED screens in Piccadilly Circus.

Does this mean that there will be nothing there until next year? Frankly it ruins Piccadilly Circus. And to think that the shiny new Hyundai LED screen, replacing the Sanyo logo in neon,  was unveiled only a month ago! 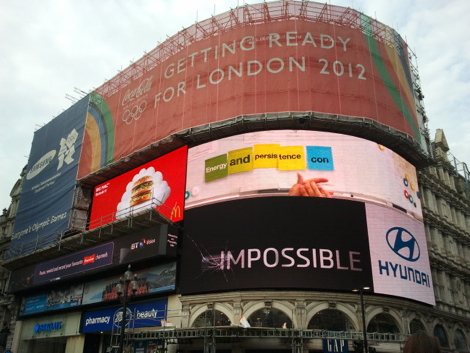 Does anyone know what’s going to be in this space? How will this precarious setting affect the other advertisers?

This entry was posted on Thursday, November 17th, 2011 at 15:28 @686 and is filed under Scuttlebut. You can follow any responses to this entry through the RSS 2.0 feed. You can leave a response, or trackback from your own site.