More Publishers On the Mobile Screen

More North American print publications can now be accessed on mobile screens than ever before.

A third annual survey by Audit Bureau of Circulations and ABC Interactive of print publications – newspapers, magazines and b-to-b titles – in the U.S. and Canada on their use of mobile found that 85% of survey respondents now have mobile content for smartphones, e-readers or tablet computers, up from 76% last year. 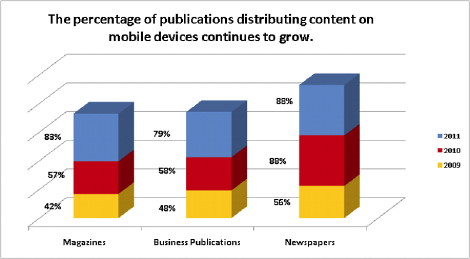 Newspapers (88%) were most likely to have mobile initiatives in place, followed by consumer magazines (83%) and business publications (79%). And 59% say their company has a strategy for capitalizing on mobile platforms. Further, 73% said readers are most likely to consume their content on e-readers or tablets compared to 60% who said the same thing about smartphones.

Publishers in the U.S. and Canada are investing in optimized mobile websites: 81% of U.S. publishers and 65% of Canadian publishers said this was an important part of their strategic plan.

In total, 74% of U.S. publishers and 70% of Canadian publishers said advertisers will demand more accountability as they spend more money on mobile buys. Two-thirds of publishers said the industry needs to report more detailed mobile metrics, such as access rates and time spent. And 72% said multimedia reports such as ABC’s Consolidated Media Report will become increasingly important as their portfolios diversify.

This entry was posted on Friday, November 18th, 2011 at 15:59 @708 and is filed under Scuttlebut. You can follow any responses to this entry through the RSS 2.0 feed. You can leave a response, or trackback from your own site.