Dave Haynes wrote back in May about a project that was working with the premise of a modestly-functioning computing device that would cost all of USD 25 and he wrote again about the Raspberry Pi project in August, we quote “Without a doubt, a few companies with flexible software will have a crack at making this work as a digital signage player once it comes to market”. 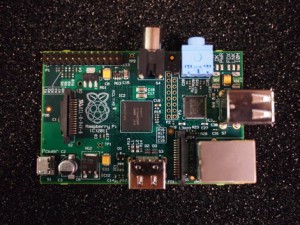 Even earlier in in August Bob Rushby said on his blog Pixels Everywhere “Pixels need computing power to drive them… for players, content management and so forth. Pixels Everywhere will need low-cost computing power, and lots of it. The good news is that there’s a lot of work going on to make that happen” when talking about the Raspberry Pi UK initiative.

The day before Christmas the UK Newspaper The Daily Mirror wrote “Cash-strapped gadget fans will soon be able to get their hands on a new bare bones PC that costs £16”.

That article states that Raspberry Pi had intended to have the devices on the market by the end of 2011 but development delays have put back the launch by about three weeks.

Silver Curve’s Bryan Crotaz (and OpenSplash Steering Group member) has spoken with the manufacturer and is all set to get his hands on some devices early in the New Year.

All indications seem to be that OpenSplash will run on said device. Now, let the innovation begin!

This entry was posted on Wednesday, December 28th, 2011 at 14:06 @629 and is filed under DailyDOOH Update. You can follow any responses to this entry through the RSS 2.0 feed. You can leave a response, or trackback from your own site.