Paris Of The Future In 3D

A joint project between Google and Paris Center for Architecture, with the collaboration of JCDecaux, End Point and design partners ultranoir, allows a 3D view of the Paris of the future. 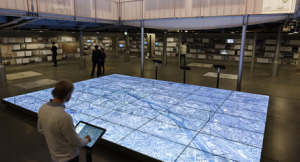 Back in 2009, Google developed the first Liquid Galaxy, an new way to display Google Earth on eight screens – which creates an immersive experience of virtually flying around the globe. Since then, dozens of Liquid Galaxies have been created all over the world and open sourced the code so anyone can build their own.

Late last year, the Paris Center for Architecture and Urbanism: Le Pavillon de l’Arsenal, approached Google to see if they could use Google Earth to power a new interactive display highlighting the Paris metropolitan area in 2020 with upcoming buildings in 3D.

The video wall, or rather video floor, is a 40 square meters surface composed of 48 screens. The almost 100M pixels – powered by 48 instances of Google Earth synchronized is operated through four multi-touch screens with pinch and zoom functionality. The view is even sharper due to a refresh of the entire Paris area with higher resolution imagery.

This entry was posted on Wednesday, January 11th, 2012 at 09:23 @432 and is filed under DailyDOOH Update. You can follow any responses to this entry through the RSS 2.0 feed. You can leave a response, or trackback from your own site.