We have a fascination with things being the largest don’t we? Perhaps that’s because the industry is predominantly run by men .. anyway, we digress… 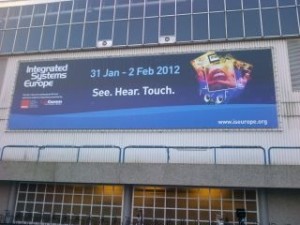 The #ISE2012 organisers stated yesterday “By any measure ISE 2012 is the largest yet”.

Speaking just before ISE opened on Tuesday, Integrated Systems Events managing director Mike Blackman said that although the total number of attendees could only be conjecture, combining the 36,702 preregistrations with a typical on-site registration level of around 4,000 attendees suggested the total level would exceed 40,000 for the first time.

Whether the snow (which we know has affected travel from Italy for example) affects those final figures in any significant way we don’t know.

What we do know is that after day 1 we can safely say that the show has been a resounding success. There’s definitely a good buzz around the show and the industry at the moment. Hats off yet again to Mike Blackman and his team!

This entry was posted on Wednesday, February 1st, 2012 at 08:04 @378 and is filed under DailyDOOH Update. You can follow any responses to this entry through the RSS 2.0 feed. You can leave a response, or trackback from your own site.