Montreal-based Astral Out-of-Home, a division of Astral Media Inc., this morning announced the adoption of Near Field Communication technology for its street furniture in Toronto and Montréal. 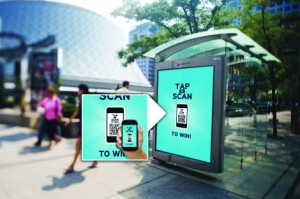 The technology provides consumers with a totally new experience by allowing them to interact directly with advertising faces via their smartphone to get all kinds of information instantly and securely.

This new feature, developed with the partnership of Gauge Mobile, Vancouer, consolidates the position of Astral Out-of-Home as an innovative leader in outdoor advertising in Canada. Using NFC cutting-edge technology will give smartphone users the opportunity to watch the trailer of an upcoming movie, get a discount coupon for a boutique or restaurant, visit the virtual showroom of a car dealership and much more just by touching the chip on NFC-enabled faces with their smartphones.

“Consumers are very active and increasingly demanding, and our NFC-enabled street furniture will allow them to quickly get relevant information about products that they like,” says Debbie Drutz, director, media innovation, Astral Out-of-Home. “For its part, the advertising community will have at its disposal the most advanced technology to prolong its interaction with consumers.”

Astral will be running a small program with its NFC technology in a couple of weeks, but expects to put NFC in for a major advertiser on a large scale in about eight weeks.

NFC technology is currently compatible with several smartphone brands, including BlackBerry, Samsung, Nokia and HTC models with others to follow. It will be integrated into bus shelters in Toronto, and Columns and MegaColumns in Montréal.

Drutz says that a program using NFC could be run on as many of the properties as it has or as little as 25. There are about 4,500 bus shelter advertising faces in Toronto and about 748 Columns and MegaColumns in Montreal

While the street furniture currently carries only traditional advertising, we won’t be surprised to see Astral move further into the digital out-of-home sector now that Drutz is on board. (She joined Astral in August from Rogers.) Astral has one prototype digital sign in front of the Musée des Beaux-Arts in Montreal, and has spectacular digital billboards in Montreal, Toronto and Vancouver.

Astral Out-of-Home is one of Canada’s leading out-of-home advertising companies with more than 9,500 strategically-placed advertising faces in key markets in Québec, Ontario, and British Columbia. As a forward-looking company, Astral Out-of-Home has embarked on a series of green-and-clean initiatives to reduce its ecological footprint and actively participate in sustainable development.

Founded in 1961, Astral one of Canada’s largest media companies. It operates several media properties—pay and specialty television, radio, out-of-home advertising and digital media properties—among the most popular in the country.

This entry was posted on Wednesday, February 29th, 2012 at 09:29 @437 and is filed under DailyDOOH Update. You can follow any responses to this entry through the RSS 2.0 feed. You can leave a response, or trackback from your own site.