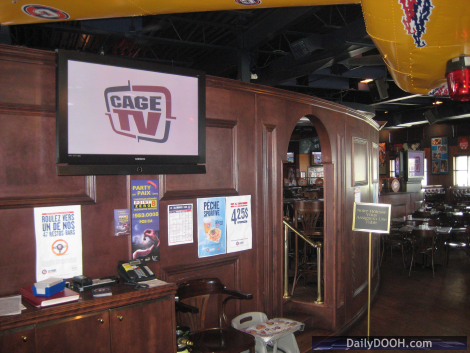 General Motors of Canada is among advertisers taking to digital media in an efforts to control costs and add to the performance value of their advertising investments.

The automobile manufacturer has moved to Cage TV, the digital screen network in 49 Cage aux Sports restaurants across Quebec to support the launch of the 2009 Chevrolet Aveo. The Aveo is appearing on close to 500 screens – one-third of all screens in the restaurant chain. (The other screens run regular broadcast television, showing mainly ongoing sports events.)

Aveo is seen four times an hour, on a loop that carries advertising, promotions, ‘bloopers’, special events and other entertainment content. More than 500,000 people visit Cage aux Sports each month including the young, active adults targeted by the advertising.

The Aveo media by was handles by Cossette Media, Quebec City.

“For Chevrolet’s Aveo campaign, we wanted to target a young and sports fanatic profile,” says Martin Lechasseur of Cossette. “Cage TV allows us to reach out to those young and active adults who are on-the-go most of the time. In addition, the network offers a great provincial coverage.”

Sportech Média operates and manages advertising sales for Cage TV in partnershp with Cage aux Sports. The restaurants have been in operation by owner/franchiser Groupe Sportscene Inc. since 1984. La Cage aux Sports is a sponsor of the Montreal Canadiens, InterBox and the Montreal Alouettes; a supporter of amateur sports with Le Club de la Médaille d’or and Sports-Québec; and a sponsor of several high-level athletes

This entry was posted on Monday, December 15th, 2008 at 07:42 @363 and is filed under Scuttlebut. You can follow any responses to this entry through the RSS 2.0 feed. You can leave a response, or trackback from your own site.