A rather late look at the month ahead what with #gs12 and #dse2012 already haven taken place. 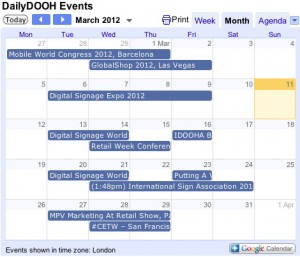 Friday, March 23rd 2012 at The Hospital Club, Private Screening Room in London sees the next Screen Breakfast Briefing, the subject this time ‘Putting A Value on Interactive Out-of-Home’.

This entry was posted on Sunday, March 11th, 2012 at 20:21 @890 and is filed under DailyDOOH Update. You can follow any responses to this entry through the RSS 2.0 feed. You can leave a response, or trackback from your own site.