EnQii won’t be releasing their new signage solution, which we believe will be called ENGAGE until early 2009 but we have been having a play with it and have to say that we love some of the new features. 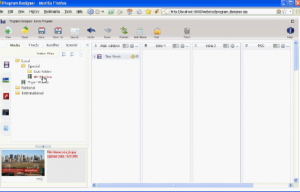 It’s written completely in Java which is a bit of a novelty but of course this does gives them complete cross platform capability (any hardware with Java Virtual Machine support should run it quite painlessly).

One of the things we liked best about it though was not the language that it was written in but the film strip playlist approach. How cool, and easy to use is that for a CMS?

This entry was posted on Monday, January 19th, 2009 at 19:08 @839 and is filed under Scuttlebut. You can follow any responses to this entry through the RSS 2.0 feed. You can leave a response, or trackback from your own site.