An Evil Queen Steals Control Of A Kingdom…

Studio Canal has worked with Limited Space for the release of their latest family movie ‘Mirror Mirror’ to take engagement in the campaign to another level. 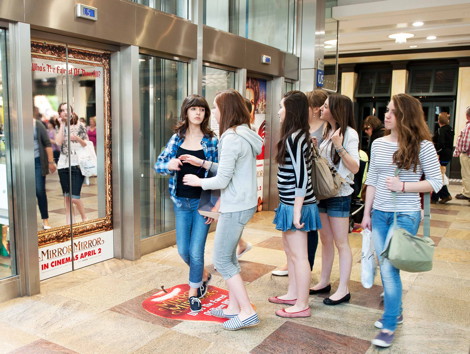 By integrating an innovative mirrored vinyl technique on the Adlift sites their target audience is fully immersed into the creative. The execution is further brought to life by apple shaped floor vinyls attracting passing shoppers and detailing information about the movie’s release and this is complemented by a further Adlift creative execution featuring characters from the movie.

This is a part of a national Adlift mall campaign which will reach over 16 million people during its 2 week duration, including families whilst they are in a leisurely frame of mind in one of the busiest periods in the mall calendar as we near the Easter period.

Creative was developed in house at Studio Canal and the campaign was planned and bought by Target Media and Posterscope using Limited Space’s national Adlift network. Distributed through 17 flagship malls that include Bluewater, the Metro Centre and Lakeside it will provide targeting to cinemas to reach heavy cinema goers as well as families within the broader mall audience.

This entry was posted on Wednesday, April 18th, 2012 at 17:44 @780 and is filed under Scuttlebut. You can follow any responses to this entry through the RSS 2.0 feed. You can leave a response, or trackback from your own site.