The Rules For Outdoor Musical Chairs

As Outdoor musical chairs seems to be all the rage in London at the moment; J joins A but only after J and C battle for job P, C leaves A to go to P, so J gets the job at A and across town Lady Tottington gets a job moving from … well you know the sort of thing – we thought we ought to document exactly what the rules are.

So, if you are all paying attention here goes… 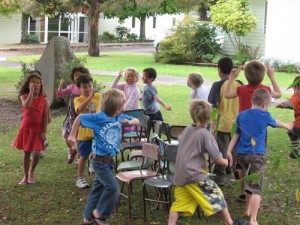 Musical chairs is a game played by a group of people (usually those involved in the outdoor industry), often in an informal setting purely for entertainment.

The game starts with any number of players and a number of chairs one fewer than the number of players; the chairs are arranged in Central London facing outward, with the people (sometimes irreverently called ‘job candidates‘) standing outside of that.

A non-playing individual plays recorded music or a musical instrument. While the music is playing, the players in Central London walk in unison around the chairs. When the music player suddenly stops the music, everyone must race to sit down in one of the chairs.

The player who is left without a chair is eliminated from the game† and one chair is also removed to ensure that there will always be one fewer chair than there are players.

The music resumes and the cycle repeats until there is only one player left in the game, who is the winner (this person is usually also bestowed some form of title, like ‘manager‘ or perhaps if they have been playing for a long time ‘director‘).

The French rarely play this game and struggle to understand why the English insist on playing these sorts of Victorian parlour games. The French tend to stay on the sidelines playing with their balls boules where the goal involves standing inside a starting circle (but it is their own circle) with both feet on the ground, tossing hollow metal balls as close as possible to a small wooden ball called a ‘Jean-Claude‘ or a ‘Jack’.

† If this happens to a player too many times they are not allowed to play anymore.

If ex-players cannot find another game to get involved with they are called ‘consultants‘.

Some ex-players take up a new game, which is called ‘blogging‘ We will talk about blogging next week in a separate article.

This entry was posted on Monday, April 23rd, 2012 at 16:50 @743 and is filed under DailyDOOH Update. You can follow any responses to this entry through the RSS 2.0 feed. You can leave a response, or trackback from your own site.

One Response to “The Rules For Outdoor Musical Chairs”