Whilst a couple of industry execs have told us they will be walking the floor at Consumer Electronics Show this week, no one else in the industry apart from GestureTek has told us thay will be present.

GestureTek Inc., the pioneer and world leader in gesture control interfaces for interactive displays and electronic devices, today announced that the company will demonstrate its pioneering, multi-patented 3D tracking and control innovations at the 2009 Consumer Electronics Show (CES) at the Las Vegas Convention Center from January 8th to 11th. GestureTek’s exhibit will be located in Central Hall, Booth #15523. 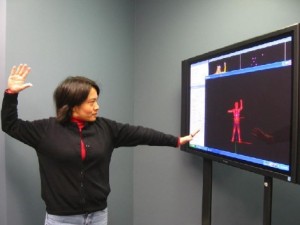 The system can be programmed to recognize virtually any pose or gesture, including hand waves, pointing or any combination of recognizable motions. For example, a hand wave can turn on a television set or activate a multi-media presentation. Circular hand movements can adjust volume, and hand swiping motions can control menu selections. Other applications include full body avatar control, two-handed and multi-touch control and hand tracking for 360º navigation control (replacing a joystick).

“What makes GestureTek’s depth based tracking solution so impressive is its real time modeling and identification of the user. The software isolates the person interacting with the system, regardless of how many people are moving around in the environment,” said GestureTek’s Co-Founder and Chief Technology Officer, Francis MacDougall. “Whether it’s a living room, boardroom or busy mall, the system’s control and responsiveness remains unaffected by light or background movement.”

Using depth sensing cameras to measure ongoing changes in positioning and distance between the various parts of a user’s image and other elements in the scene, GestureTek’s depth sensing system repeatedly and reliably tracks a user’s unique movements. The system can even capture people’s real-time full-body video image or their full-body 3D avatar onscreen, enabling users to see themselves as they interact dynamically with computer-generated characters, objects and icons in a three-dimensional virtual world.

Along with applications for exciting 3D and 2D interactive experiences on everything from personal computers to game consoles, mobile devices, digital signs and digital picture frames, GestureTek has already deployed successful commercial 3D tracking solutions in interactive displays worldwide. At the Beijing Olympics, for example, GestureTek’s hand tracking technology powered a spectacular interactive flight simulation attraction that allowed individuals to explore the province of British Columbia in a virtual airplane that was controlled by tilting and moving their hand.

CES participants are invited to visit GestureTek’s exhibit in Central Hall, Booth #15523, where the company will showcase its latest innovations in gesture control interfaces for mobile phones, PCs, interactive multi-touch tabletops and other consumer devices. “Visitors will be treated to eye-popping demonstrations of the many ways in which motion control interfaces are being used by consumers and business,” says MacDougall.

This entry was posted on Monday, January 5th, 2009 at 21:33 @939 and is filed under Scuttlebut. You can follow any responses to this entry through the RSS 2.0 feed. You can leave a response, or trackback from your own site.