Has @JBTecDS Effectively Defected To @Signagelive?

News just in is that Signagelive has appointed JBTec as its preferred distributor in Brazil. We are told that all Signagelive products are immediately available as a SaaS model in native Brazilian Portuguese. 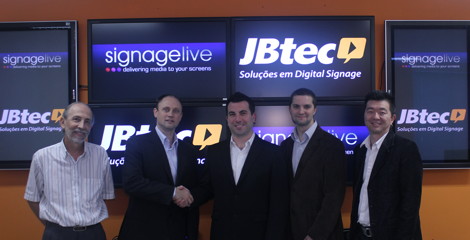 As usual of course there is much more to this than actually meets the eye – especially as JBtec have been a Scala shop for almost a decade – in fact Scala make much of the fact that, we quote “JBTec is the largest Scala Inc’s Value Added Reseller in Brazil”.

We know from our own research in South American that (a) Brazil is very price sensitive (b) JBtec (and others) in the country overwhelmingly like the SaaS model and separately (c) that there have been rumours of Scala upsetting its partners by wanting (and trying) to deal direct for a time now (a rumour that is global but one that very much started in Brazil).

In fact on April 18th we emailed Scala CEO Tom Nix and asked “tom we hearing that scala will be selling direct in Brazil. care to comment a” and never got a reply.

Whilst JBTec have chosen well in aligning themselves with Signagelive we can’t help but feel that JBtec probably figure that they have put a decade into promoting Scala (and whatever the truth is with all the ‘Scala selling direct shenanigans’) have metaphorically had the rug pulled from underneath them.

Bruno Gianzanti, CEO of JBTec told us “JBTec is extremely happy to have Signagelive’s diverse solutions available for our customers”.

He added “They are a perfect match for many of our customers who need a low-cost, but powerful solution. Their support for multiple types of end-points, including tradition PC’s, Android/SMIL players and even your laptop’s screen saver, greatly expands the way our customers can use digital media to communicate.”

Signagelive tell us that their decision to enter Brazil depended on the ability to work with a partner like JBTec, a Sao Paulo-based company with over a decade in selling digital signage solutions into the Brazilian market.

Reliable sources tell us that Scala is going all out to try and win signage business at the 2014 FIFA World Cup Brazil (and no doubt two years later at the 2016 Summer Olympics) but if that is true then it looks like Scala have taken their eye off the ball and been caught short.

Signagelive’s win is very much Scala’s loss and unless Scala put paid to these ‘going direct’ rumours we can only see them losing more business elsewhere around the world.

JBTec specializes in Digital Signage, designing, deploying and managing digital signagenetworks nationally and internationally since 2000. We were the first company in Brazil to offer products and professional services to this segment with the concept SAAS (Software As a Service). We continually establish new partnerships with leading companies” SignageLive, Microsoft, Itautec, Intel, MediaVue, Iadea, Samsung, LG, Matrox, UOL, Climatempo, among others, in order to deliver the best possible solution for our customers.

This entry was posted on Tuesday, July 3rd, 2012 at 17:18 @762 and is filed under DailyDOOH Update. You can follow any responses to this entry through the RSS 2.0 feed. You can leave a response, or trackback from your own site.

One Response to “Has @JBTecDS Effectively Defected To @Signagelive?”