There was (unusual) controversy galore on the first night of the 2012 Henley Festival Wednesday evening and we would like to categorically state that neither of the two events had ANYTHING to do with us, or any of the guests that we took that evening. 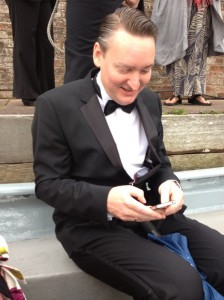 There seemed to be more celebrities than usual in attendance this year; regular Henley Festival patron Sir John Madejski OBE was there of course, Albert Roux OBE as usual greeted all of his guests in person to the Roux at the Riverside and from Formula One we spotted Ron Dennis CBE, Ross Brawn OBE and Adrian Newey and no doubt celebrating his own (born on the 4th July) birthday a certain Harvey Goldsmith CBE.

From our own industry we met; WonderWorks 3D’ Ed Simons, iSAMS’ Jamie Reid (with zillions of clients in tow) and OVAB President Dirk Huelsermann who was spotted impersonating a pinguis germanica (shown to the left in the TS GUARDIAN Sea Cadets ferry at Phyllis Court Club).

Dirk was nearly caught in a sail-by-texting-accident but there is absolutely no truth in the rumour that he was anywhere near the patron’s hospitality tent when the alleged bum pinching incident took place.

As for the main (fun) incident of the evening, most of the audience actually thought that Suggs (from Madness fame, real name Graham McPherson) was invited on stage to sing a duet with Sting – well that was before two burly security guards politely hauled him off stage left!

This entry was posted on Thursday, July 5th, 2012 at 13:02 @585 and is filed under DailyDOOH Update. You can follow any responses to this entry through the RSS 2.0 feed. You can leave a response, or trackback from your own site.