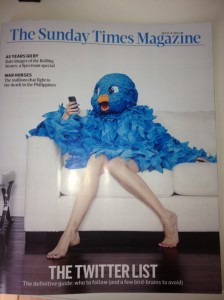 Compiled for @TheSundayTimes by @MattRudd it is also peculiarly UK centric as well.

Mind you, it’s always worth being reminded, as @MattRudd writes in his opening paragraph that “In 2006, three American dudes …. came up with the idea for Twitter”. Just how phenomenally successful that which Jack Dorsey, Noah Glass, Evan Williams and Biz Stone founded is of course now a matter of record.

And if “50 (are) too few for your Twitter needs” as it says on the last page of the eight page article you can visit thesundaytimes/twitter where a top 100 are listed, or you could if it wasn’t behind a paywall.

Umm, perhaps it is just us but we found that kind of ironic especially as there is such a thing as a ‘Twitter List’ which would have been a great, dare I say ‘new age’ way to share a top 50 or top 100 list (err did we say ‘paywall’?).

This entry was posted on Sunday, July 8th, 2012 at 13:01 @584 and is filed under DailyDOOH Update. You can follow any responses to this entry through the RSS 2.0 feed. You can leave a response, or trackback from your own site.