In a cortege that must have used more fuel than a Red Arrows performance over the Farnborough Air Show (more on that on our visit there later this week) Digital Signage of a sort (and a streaker) came to Henley-on-Thames early this morning. 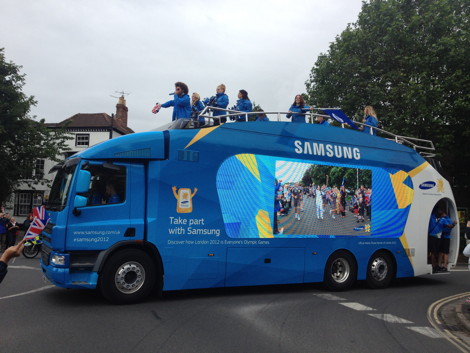 If you don’t count the police outriders and the sole cyclist who sped past, the cortege was led by the Samsung lorry (shown above) complete with neat LED on the side.

Said LED was relaying pictures from another bus further down the road / cortege which was ahead of the torch bearer which meant that ahead of the procession the crowds lining the street could see what was coming!

Despite all the gas guzzling it was actually quite clever – especially as the runner came past and was gone in 10 seconds in a sea of faces!

This entry was posted on Tuesday, July 10th, 2012 at 11:45 @531 and is filed under DailyDOOH Update. You can follow any responses to this entry through the RSS 2.0 feed. You can leave a response, or trackback from your own site.