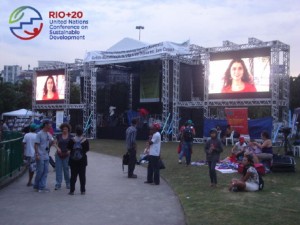 Each day of the summit, a film crew, journalists and others provided content of recorded events, which was edited using templates created with Scala Designer and sent to a Scala content management server for playlist distribution. The content was displayed on multiple LED screens and televisions throughout Flamengo Park via Wi-Fi connections to Scala Players. The digital signage project was developed by Scala partner JBTec Digital Signage and RJ21 Communication and also in partnership with Rio StudioLine..

“The project was a success with thousands of people having watched over 250 videos that were created and distributed,” says Mauricio Teixeira, director at RJ21 Communication. “Major summit events were quickly available on the screens for everyone to see.”

If the project were carried out today, JBTec we guess would not have used Scala for this install. They effectively defected to Signagelive back in early July.

This entry was posted on Tuesday, July 24th, 2012 at 08:00 @375 and is filed under DailyDOOH Update. You can follow any responses to this entry through the RSS 2.0 feed. You can leave a response, or trackback from your own site.