The spot features Nadal engrossed in a game of poker on his smartphone as he walks the streets of Barcelona totally unaware that scores of fans are quickly amassing and following his progress.

The TV ad is one part of PokerStars’ global marketing campaign, which also sees Nadal make his debut for the brand in outdoor and online advertising across selected countries. (We’re trying to locate where the outdoor campaign in running and whether digital screens are part of the picture. Ed.) 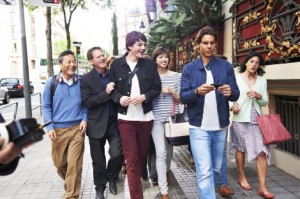 The campaign, which communicates the new relationship PokerStars has with Nadal, encourages fans of tennis and sports to download the PokerStars Mobile App, available for Android.

“I’m still quite new to playing poker and am focused on becoming a better player, so I really didn’t need to act very hard when shooting these scenes,” Nadal says. “Since PokerStars now has a mobile app, I can play with friends wherever I go, whether it’s on my mobile phone or tablet. My friends know I’m naturally competitive, which has served me well in my tennis career, I’m hoping some of the skills I’ve developed on the court will help me improve my poker game.” 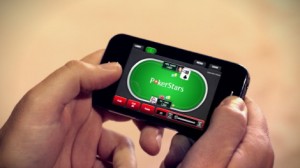 “Rafa is a highly competitive athlete, a strategic player and known for his integrity both on and off the court,” says Alex Payne, chief marketing officer of PokerStars. “These qualities make him an ideal ambassador for PokerStars and a compelling spokesperson for the game. Rafa’s endorsement helps correct some of the misperceptions of the game, and emphasizes the great mix of entertainment and skill in poker when played responsibly.”

The new ad was filmed earlier this year in Barcelona. The creative was developed in-house by Stars Creative.

The partnership between PokerStars and Rafa Nadal builds on previous relationships with some of the world’s greatest sports stars, including Boris Becker, Sebastien Chabal, Gianluigi Buffon and Mats Sundin.

The new 30 second ad will air as of September 10th on major sports and specialty networks across Canada.

PokerStars.net operates what is believed to be the world’s most popular online poker site and serves the world’s largest poker community, with more than 49 million registered members

This entry was posted on Monday, September 10th, 2012 at 14:30 @646 and is filed under Scuttlebut. You can follow any responses to this entry through the RSS 2.0 feed. You can leave a response, or trackback from your own site.