In the Ukraine tomorrow REX opens its doors – the REX exhibition is the number one trade show in Ukraine’s advertising market and is being held at the KyivExpoPlaza, 2B Salyutna Street, Kiev between 25th and 28th September. 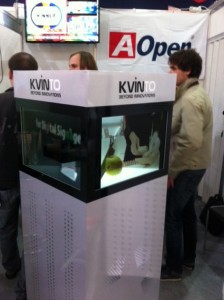 Running alongside REX are several other events, two of which would be of interest; a Digital Signage Conference 2012 (on the 26th September) and a Digital Marketing Convention 2012 (on 27th and 28th September).

AOpen’s Natalia Vorontsova (and a speaker at the event) tells us that “this is the first ever Ukrainian Digital Signage conference. The main goal is to educate System integrators and to open up their minds to creative Solutions”

AOpen are also welcoming visitors at REX to visit the KVINTO booth (C522) where there are, what sounds like, a couple of interesting solutions, most specifically the transparent screens cube, displaying content on all four sides, running on an AOpen DE57-HA (shown above)

This entry was posted on Monday, September 24th, 2012 at 09:02 @418 and is filed under Scuttlebut. You can follow any responses to this entry through the RSS 2.0 feed. You can leave a response, or trackback from your own site.