When we first wrote about Denver-based PlaceWise Media and its Shoptopia program in malls in 55 top DMAs a year ago, we had just interviewed Mort Aaronson, chairman and CEO, at the Digital Place-based Advertising Association’s Digital Media Summit where Aaronson had been distributing promotional material. 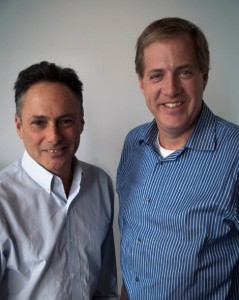 One year later, PlaceWise is in 150 malls with plans to be in 200 by year end and, with the DPAA’s Digital Media Summit only a week away, rather ironically we think, PlaceWise has withdrawn its DPAA membership.

Shoptopia has always been about So-Lo-Mo (social/local/mobile). In addition to providing organized, localized, personalized content to mall shoppers, Shoptopia has the advantage of being device agnostic.

And now, “We’re getting ready to launch a new platform that will be interesting in terms of mobile, mobile app, SMS and more,” says John Dee, president, during a new interview last week with Dee and Aaronson.

Shoptopia is an integrated digital media network that interacts with shoppers before, during and after visits to their favorite malls using online, mobile, social and on-premise tactics. Everything that Shoptopia does is tied to ’local’, whether it’s a local store on Facebook or a local deal for the shopper in the mall, and all is integrated from the one platform. It uses all digital touchpoints to engage and interact with customers throughout their typical path to purchase.

While the company is across the U.S., there are no plans at this time to expand into Canada or elsewhere.

“We’re in 92 of the top DMAs in the US, but Canada is a different market with a different set of retailers and different deals,” says Aaronson.

We asked Aaronson and Dee why PlaceWise was withdrawing from DPAA membership, and the answer was that they weren’t interested in hearing people talking about screens.

The future of OOH is with the pad, the laptop and the phone, they said. And one (we won’t say which) said that he felt that the screens are a business that’s going away! The other disagreed, but felt, while screens “will be around, the focus is mobile. We’re the digital last mile. We’re a way of taking the ad directly to the client. DOOH doesn’t move our needle.”

The personalized message is what they say does move the needle for the shopper. And, at this point, PlaceWise wants to move from only servicing the malls. The next step, they say, is to move to all shopping, starting with the major stores that tend to build individually in the mall areas but have their own buildings. They have identified 550 markets, and hope to start testing in Q1, 2013, rolling out in about 50 markets in late 2013.

“Location is only one piece of the picture. It’s the context that matters,” says Aaronson. “Intent plays a role. It’s important for the customer to get the right message at the right time. That’s what we offer.”

This entry was posted on Wednesday, October 10th, 2012 at 08:00 @375 and is filed under DailyDOOH Update. You can follow any responses to this entry through the RSS 2.0 feed. You can leave a response, or trackback from your own site.