The Wall Street Journal Office Network has unveiled WSJON2.0, a system-wide upgrade designed to increase the impact and effectiveness of ads on the network while it improves viewer engagement. 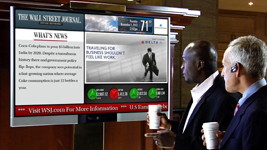 WSJON2.0 will be rolled out on November 5 across WSJON’s network of digital screens in more than 760 premier office buildings across the U.S., serving a daily audience of nearly 1 million affluent, business professionals. 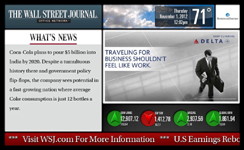 Additionally, WSJON’s audience and performance metrics can now be accessed within the Nielsen IMS Clear Decisions system. Matched with the GfK MRI Doublebase, the widely used consumer research database, WSJON’s audience has the highest household income among such leading news and business networks as CNN and CNBC, and print publications like Fortune and Forbes in the top 10 DMAs.

“The year 2013 will represent a new era for digital place-based media,” says Harris. “Audience and performance metrics, along with technology linkinbuyers and sellers, will enable it to be planned, bought and sold like all other digital ad platforms.”

This entry was posted on Tuesday, October 16th, 2012 at 10:00 @458 and is filed under DailyDOOH Update. You can follow any responses to this entry through the RSS 2.0 feed. You can leave a response, or trackback from your own site.