Last Wednesday night, as part of #DpbMedia Week in New York, we had the opportunity to tour Bloomberg’s corporate headquarters and see the existing three digital out-of-home installations and preview a fourth one in the making, all developed by Telecine Multimedia, Montreal, with Scala management software. 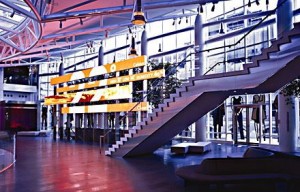 The views of the city from the windows of the glass-walled offices housing 7,000 people are extraordinary, but really, so is the signage – some of which the public sees as backgrounds for Bloomberg’s many TV programs.

What is seen in real time on all the screens is almost completely seen in all Bloomberg offices around the world, and is all in English except for one exception in Japan.

The first set of DOOH that we saw were the Bloomberg Cove flat panels, found in 20 office areas. There are about 260 three flat panel configurations at the corporate headquarters (Which is about 780 individual screens) and more than 800 Cove displays globally. These are strictly used for real time operational metrics of all types, that can include everything from stock trade prices to the numbers of sales calls. Because of the open concept offices, they can be seen by all, and the content is also uploaded on staff monitors. Screens are purposely hung from the ceiling because of the open office consideration. They raise awareness, boost morale, provide transparency, and help with workflow management. Cove screens are manufactured by NEC.

Bloomberg Link is a compilation of four colourful varied-size, long thin screens that link the east and west side of the building on the sixth floor. We say colourful, because they change colour according to the ever-changing live content that can range from the weather to the value of an international currency.  This can include news of all different types and these screens are often the background for the TV programs. The display hardware here is from Daktronics.

Bloomberg Arcade screens are also scattered throughout the building and their content, using projectors at the moment, is specifically geared to helping build a sense of culture and community among employees both at Bloomberg headquarters and worldwide. They give information of employee awards, promotions, personal happenings, vacations, and events from the offices around the world as well as in New York. There are more than 160 Arcade screens in the corporate headquarters and almost 760 globally.

And coming up soon will be Bloomberg Onsite Pro, which, as we understand it, will allow companies to take content from Bloomberg and schedule it into their own environments.

To say that we were impressed is putting it mildly. But having seen other work from Telecine, we were not really too surprised.

This entry was posted on Sunday, October 21st, 2012 at 13:01 @584 and is filed under DailyDOOH Update. You can follow any responses to this entry through the RSS 2.0 feed. You can leave a response, or trackback from your own site.