Those folks who went to #ScreenmediaExpo earlier this year may have seen Flomio, one of the vendors taking part in the NFC Bootcamp. 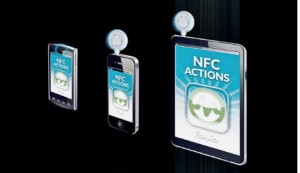 Flomio co-founders Richard Grundy and Tim Ronan, reached out to us this week to tell us about a Kickstarter project they’ve setup.

Kickstarter is the world’s largest funding platform for creative projects and one that we’ve had a keen interest in since it started (we tried to get Kickstarter along to #DSInvestor in October, unfortunately with no success). We’ve already contributed ourselves to a number of Kickstarter projects – most excitingly for us at the moment is the Brydge + iPad – which should, together with the iPad 4’s that Santa brings, give us an alternative to carrying around our MacBooks.

Anyway, Flomio’s Kickstarter project is for an NFC accessory for iPad and iPhone, called a Flojack that may allow for exciting interactive signage solutions for very little money.

It’s an interesting and well thought out idea and if all goes well, then Flojacks will be shipping by March 2013.

This entry was posted on Thursday, November 1st, 2012 at 13:39 @610 and is filed under DailyDOOH Update. You can follow any responses to this entry through the RSS 2.0 feed. You can leave a response, or trackback from your own site.