Nice article about Chris Riegel and STRATACACHE in the Dayton Daily News this week. 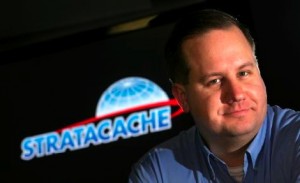 Cornily entitled ‘(Digital) sign of the times: Stratacache expects growth‘ it’s well worth a read. It looks as though they may be ready to move into a new larger head office, either in Dayton or Texas (note that Boston, Montreal, Salt Lake City and San Jose, Calif. are current bases for their technical folks and wouldn’t move) – though Chris told the reporter that the announcement was still 2 months away.

They have an interesting goal – hitting $250 million in annual revenue by 2012!

Some nice stats about them at the bottom of the article too, repeated here…

Quote: “We’re in the agile communication business. A certain large retailer of ours, when they fired their CEO and gave him a huge severance package, was able to be on live with their associates 20 minutes after it hit CNBC.” — Chris Riegel, Stratacache CEO.

Acquisition Plans: “We will certainly buy companies in 2009 and continue to grow that way.” — Riegel.

This entry was posted on Wednesday, January 28th, 2009 at 07:40 @361 and is filed under Scuttlebut. You can follow any responses to this entry through the RSS 2.0 feed. You can leave a response, or trackback from your own site.