E Ink Corporation, Cambridge, Massachusetts, was spun out of the Massachusetts Institute of Technology (MIT) Lab back in 1997. 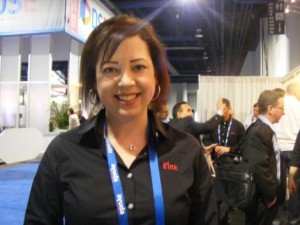 It went through many developments, among which was its first consumer application in 2004 with Sony’s ebook reader LiBre, its first display in a cellular phone (Motorola) in 2006, and its first 14.1” flexible colour display (with L.G. Philips) in 2007.

Although I’m sure that many of our readers are familiar with E Ink and its technology, it was unfamiliar to me until the friendly Jenn Vail, senior manager, marketing, gave me a quick course of what it was all about during #dse2013 in Las Vegas last week. E Ink is the creator of electronic ink. It is used in the displays in Amazon Kindle, Barnes & Noble’s Nook, Novatel’s MiFi and other devices.

E Ink refers to its displays as electronic paper. As Vail explained it, this ePaper takes the best elements of the printed page and merges it with electronics to create a new generation of paper: a low power, new generation of instantly updateable paper, readable even in the brightest sunlight.

In terms of technology, it all has to do with charged black and white microcapsules, applying electronic fields to a display so the pigment rises or falls, and a lot of other technical information which I personally don’t pretend to understand.

However, what is interesting is that the company which began in signage and then put it aside, is now getting back in signage. E Ink is now working with partners on a smaller pixel for lower resolution than currently used for subway stations and for emergency signage. Vail talked of a 72” digital sign using 1/70th of the power of LCD.

I have a feeling that we’ll be gradually seeing much more of E Ink in the digital signage sector in the future.

This entry was posted on Tuesday, March 5th, 2013 at 03:42 @196 and is filed under DailyDOOH Update. You can follow any responses to this entry through the RSS 2.0 feed. You can leave a response, or trackback from your own site.