Casio America Inc. introduced new systems geared for a variety of digital signage applications at Digital Signage Expo in Las Vegas last week, but the one that intrigued me was Casio’s YA-S10 Converter System that enables users to project images onto curved pillars, round areas, flat surfaces or any unique shape. 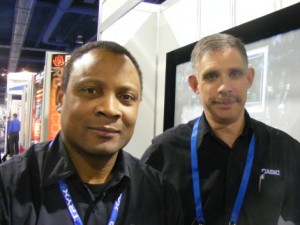 Carlisle Robertson, key account/business development manager, and Michael Powers, vice-president sales and marketing, both of Casio Canada, explained how the system is set up to adjust any image misalignment or distortion without the need for additional hardware.

Using the YA-S10 Converter System with any Casio LampFree projector, images can be corrected for curved surfaces using free-form surface compensation with a lattice of up to 81 grid points for adjustments.

The company now uses the lamp free laser and LED hybrid light source as the basis to allow projectors to operate 20,000 hours without change. It can now do digital signage applications for convex, concave or even a customized shapes. One projector can encompass 180 degrees, while two projectors can do the full 360 degrees.

Also new is Casio’s Projector Stacking, It is expected that the Projector Stacking System and YA-S10 Converter System will increase efficiency and streamline costs for retailers and business owners alike, further raising industry standards and solidifying Casio’s presence as an industry leader.

The Projector Stacking System, designed with two Casio projectors stacked on top of one another, projects two sharp, high-quality images, which the YA-S10 Converter System control box then merges into one screen. It is available in two different models, both of which provide roughly twice the lumen output provided by a single projector.

When the YA-S10 Converter System correction box is connected, both projectors can also project high brightness images at any angle making the Projector Stacking System ideal for digital signage, sports bars, house of worship and many large venue applications. 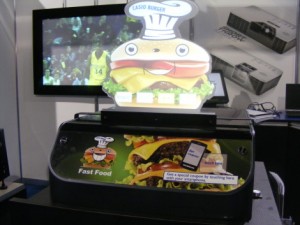 The company also showed its virtual mannequin and, we were told, is also offering an interactive mannequin in partnership with 4D, Toronto.

This entry was posted on Tuesday, March 5th, 2013 at 18:12 @800 and is filed under DailyDOOH Update. You can follow any responses to this entry through the RSS 2.0 feed. You can leave a response, or trackback from your own site.