Lamar Gearing Up for Olympics

By the time the 2010 Olympic Games and Paralympic Games in Vancouver launch next February, Lamar Transit Advertising Ltd. expects to have 46” LCD screens on every platform station of Vancouver’s existing 31 station Skytrain line and the city’s new nine station Canada Line subway line due to open later this year. 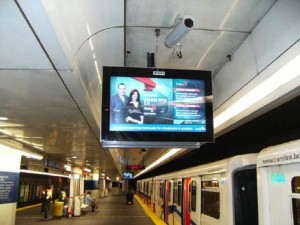 Further, following a recent pilot project with digital signs on the side of one city bus, Lamar is hoping for approval to similarly equip between 10 and 25 buses by the start of the Olympic Games – part of a plan to eventually have digital signage on 100 buses of the Vancouver Transit System.

And Lamar’s plans don’t stop there. Under its 20-year contract with the BC Transit system, it is also planning for in-bus screens by 2011, and digital bus posters on double deckers in Victoria and Kelowna in the unspecified future.

“In Vancouver, we plan to have a total of 165 screens on all Skytrain and Canada Line station platforms by the opening of the Games,” says Byron Montgomery, Lamar’s vice-president general manager in Vancouver. “We’ll have Canada’s only full system rapid transit network, the Lamar Commuter Digital Network.”

There are currently about 52 screens up or going up in about 11 stations. The screens use Omnivex software provided by NEC, and commuters see content that’s a combination of transit information, Global BC’s news, and advertising.

As far as the buses go, “We believe digital bus screens will be the future,” says Montgomery. While the pilot project used the UK’s Litelogic LED screen, “We’re looking at a variety of vendors,” says Montgomery.

“All this is costing an investment in the high seven figures over a two year period, but Lamar firmly believes that now is the time to invest,” he says.

In 2005, Lamar, a 107-year-old company with head office in Baton Rouge, Louisiana, took over Obie Media Group which had the contract for transit advertising services with BCTransit, the transit authority serving Vancouver, Victoria and more than 30 smaller municipal systems in BC. Its contract runs to 2020.

“In the first 11 years of the contract, we’ve increased revenue for the transit company by 290% and, with our digital offerings, we have a firm goal to double that,” says Montgomery,

This entry was posted on Sunday, February 15th, 2009 at 20:27 @893 and is filed under DailyDOOH Update. You can follow any responses to this entry through the RSS 2.0 feed. You can leave a response, or trackback from your own site.

One Response to “Lamar Gearing Up for Olympics”