Clear Channel Outdoor (CCO) launched a social media campaign on 16th June at the Cannes Lions International Festival of Creativity, designed to ignite conversation and debate about realising creative potential, which will lead to the live creation of the world’s first hand-painted micrography billboard, with the mural generated entirely from tweets. 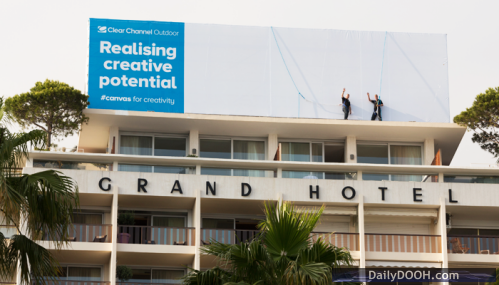 #canvas for creativity is a Twitter-based marketing programme designed by Clear Channel Outdoor that seeks to spark debate and share the best in creative thought leadership, against the backdrop of a global, real-time and increasingly digitally-connected world. Clear Channel Outdoor will be hosting and contributing to the conversation, offering its perspective on each topical discussion as one of the globe’s leading outdoor media owners.

In addition, every day throughout the Cannes Lions festival CCO is inviting two key industry influencers to lead a debate about a creative topic using their own Twitter feeds, marking the tweet with #canvas. Influencers signed up to the programme include Mark Cridge, founder of digital and creative agency Glue.  The best tweets from each day’s #canvas debate will be collated and used to create a live, hand painted mural, located in the grounds of Le Grand Hotel in Cannes.

Using the artistic form of micrography (the technique of using text to form an image when viewed at a distance, creating an interplay between the text and image), three world class artists will spend up to eight hours a day hand-painting the best comments, perspectives, observations and quotes on to the giant 16m x 4m canvas, with the final mural image emerging throughout the festival week.

The 5 creative topics for debate are:

Social media visualisations of the #canvas Twitter content will be streamed on CCO’s website , digital screens at the festival, and a high-resolution projection on to a separate 18m x 5m canvas located on the roof of the Le Grand Hotel, Cannes. The projection canvas has been built specifically for the festival and sits at the highest spot on the Croisette, a spot never before used for advertising or media at Cannes Lions.

After the giant artwork is completed, a searchable gigapixel photo of the final image will be featured on CCO’s website, allowing ultra-close up visual inspection, and the ability to find tweets using individual Twitter handles.

Paul Evans, Marketing and Planning Director for Clear Channel International, commented:  “By engaging key influencers and some of the most innovative minds in the global creative and advertising community and beyond, our programme will not only inspire and rally extraordinary thought leadership, but we will go on to create a one-of-a-kind social media-fuelled piece of art.  There cannot be a better real-world demonstration of how outdoor and social media are perfect partners.”

The artists are Patrick McGregor and Tait Roelofs, as part of CURB’s team:

Patrick McGregor is an artist trained in hand-painted billboard ads and fine arts since 1993.  His work spans the past two decades, delivering extraordinary outdoor ads for a wide range of companies ranging from Nike to Marc Jacobs as well as galleries.

Tait Roelofs (aka T8) is a Los Angeles based artist working in various media, mainly painting, sculpture, and video. T8 has exhibited in numerous art fairs including Art LA, Scope NY, Pulse Miami, and at the ISLIP Art Museum in Long Island. He has had numerous solo and group shows in Los Angeles and New York. He is currently represented by De Soto Gallery in Los Angeles.

This entry was posted on Tuesday, June 18th, 2013 at 08:05 @378 and is filed under DailyDOOH Update. You can follow any responses to this entry through the RSS 2.0 feed. You can leave a response, or trackback from your own site.