How many people do you know that can’t wait to run to work every day of the year, that wake in the middle of the night to scribble ideas on an iPad and email them to themselves so they won’t forget them in the morning, and travel around the world to put their creativity to work for major companies, organizations, brands and even governments? 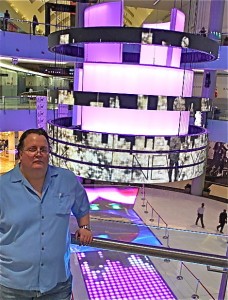 Danny Barnycz at the Dubai Mall

They are just two of the many projects taken on by this peripatetic gentleman and his company.

“Some of our projects take between two and five years from the planning stage to completion,” Barncyz says. “We might even be thinking and planning for two years before starting the work, because we do much more than just screens or content. For example, we just did the city of Doha in Qatar, site of the World Cup in 2022. We spent a year designing the project that included lighting, broadcast, LEDs, digital out-of-home, places, how-to-find, and much more.

“Right now, for a non-profit organization, we’ve been designing the PlayhouseSquare, a major six-block theatre district in Cleveland full of wonderful restored theatres with beautiful architecture. It will have a 22’ high chandelier with 4,200 crystals. There will be 70” double-sided sidewalk LCDs, a 30’ stylon, and all new double-sided theatre marquees. And everything will be interactive. We’re basically creating a full theatre district. It should get going in January, 2014.”

How did Barnycz get into such a field?

“I grew up in the entertainment world,” he says. “At 18, I was doing music mixes for concerts for stars like Aretha Franklin, and then was traveling around with bands and concerts. I produced big events, and then was a mall developer for 10 years. You know, 25 years years ago, we already had video screens. And we were the developers of narrowcasting for retailers. It all evolved from there.”

One of the projects that probably brought Barnycz’ name to worldwide attention is the American Eagle display at Times Square (one of several of his work at that location).

“It was a game changer,” he says. “Anybody could have put up a large standard screen. But I could see no reason why we couldn’t do various shapes and sizes, so we created 12 crazy shaped, unique screens.”

Another ‘game changer’ was the Dubai Mall where he worked with a $100 million budget and 50 different companies to put it together.

And the Mall of the Emirates project, with its 6.5 million sq. ft., has “the most sophisticated AV installation on the planet,” he says.

In some cases, he continues to handle the projects and their changes, but in Dubai, he interviewed, hired and trained a staff to handle everything once the project was completed.

Not all the projects are as large as those in the Middle East, but are still spectacular. The company has put three digital boards up for Nike on 34th St. at 7th Avenue in New York, including, he says, “a monster board”.

Another big project is the block-long ‘architectural experience’ for the Mariott Marquis in New York.

We asked Barnycz, does he believe content is king?

“People who’ve said that are, oh, so wrong,” he says. “What is right is, ‘Relevant content is king.’ If it isn’t relevant, it isn’t right.”

These days, he gets calls from people and companies like Warner Bros. who know of his work strictly by word-of-mouth and reputation.

“We’re able to cherrypick what we want to do,” he says. Nevertheless, he liked the fact that this week he got a call from a gentleman who wants him to handle four major projects in four separate cities, including New York and London.

Will he be doing it?

“I don’t know yet. We’re going to meet next week to learn more about it. We’ll see.”

Whether it’s these projects or others, we expect that Barnycz’ work will be noticed for many years to come.

Danny is one of the speakers at our next Thought Leadership Summit, ‘Billboards Unplugged‘ which will take place in New York City on the afternoon of Monday 21 October 2013, as part of #DpbMedia week.

This entry was posted on Monday, July 15th, 2013 at 08:00 @375 and is filed under DailyDOOH Update. You can follow any responses to this entry through the RSS 2.0 feed. You can leave a response, or trackback from your own site.