When Jeremy Gavin launched a company in 1999 dealing with web sites and kiosks, he certainly had no expectations that his company’s focus would change and that today Screenfeed would be producing content for more than 40,000 digital out-of-home screens around the world. 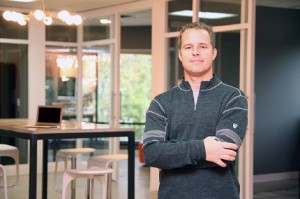 “When we decided to build Screenfeed in 2007, we figured that there was a market for content, and we would fund this through our other work while this business would get off the ground – and maybe by year two we’d get some business,” says Gavin. “We tweeted that we were offering this and the very next day we had a small order. While that company is no longer around, it gave us our start.”

Today, Screenfeed has more than 300 customers, mainly in the U.S. but also in the UK, Holland, Australia, South Africa, India, Dubai and more. Further, it has more than 50 content options in its menu, all available for a monthly subscription fee. And 80% of the content offered is written, edited and produced by Screenfeed’s team of 10 based in Minneapolis.

“We’ve never had investors,” says Gavin, who is 100% owner. “And we still have some clients in our website and kiosk business. But our main focus is content, all with clients who pay a monthly subscription fee.”

Screenfeed does offer news from Associated Press, and it licenses news photos from Reuters and others, but even with these, the team writes its own content for clients that come from many sectors: national banks, malls, even small businesses. (Gavin says that companies like Reuters see his company as offering a new additional market for them)

“Our biggest client is Wells Fargo; our oldest is the Motor Vehicle Network,” says Gavin. “For the most part, we don’t do custom content, although you could say that we do some semi-custom. For example, for a bank, we’ll make sure that their content has messages that aren’t detrimental to them or that mention competitors.” 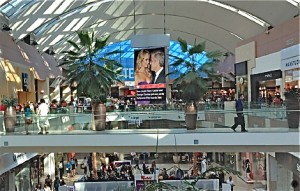 Clients can pick from the 50 content options that are always being updated – “We want to keep things fresh,” says Gavin – and they can pick what is relevant to their audiences to get their messages across.

“When you go to a trade show, all these people with their screens have to deliver content,” he says. “If they spend $100,000 to roll out their network and then only one-third of the people watch their content, it is a waste of money. The content must be relevant to them.”

Last June, Screenfeed created a special content channel geared to animals, getting material from National Geographic and other material so that it could produce 60-second ‘creature features’. It even added pictures of animals to the weather and other messages. Gavin said that a zoo had been looking for something like this, and he expects that it will be used by the Association of Zoos and Aquariums. among others. Of course, those who take his various syndicated content can add in their own messages.

One of Screenfeed’s major clients is Westfield Malls. It has 13’ x 18’ high double-sided rotating screens in 13 premium malls. Screenfeed provides entertainment content, weather, tweets by celebrities, and other 15-second content for it.

But its clients aren’t all big. One of its smallest is s construction warehouse storing material from disassembled buildings. It takes news and weather from Screenfeed to intersperse with messages for staff. 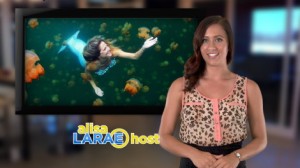 ‘Off Topic’ episide with professional mermaid

Screenfeed is currently developing a new content product called ‘Off Topic’. It’s another original Screenfeed production created just for digital signage, and will be available as of August 1, 2013.

“We’ll be producing two episodes each week to keep screens fresh and it’s our first offering with an on-screen personality,” says Gavin. “The episodes are always 90-seconds and feature interesting stories most audiences have not heard before, which is why we call it Off Topic.” (Among upcoming topics are one on a ‘professional mermaid’ and another on sand art featuring a man who does beautiful artwork on beaches using only a rake.)

Screenfeed doesn’t do much advertising but attends Digital Signage Expo, InfoComm, the Outdoor Advertising Association event, and will be at Customer Engagement Technology World in New York this fall.

“We’ve developed really good relationships with the various companies offering screens,” says Gavin. “We tell them that we want to be a tool in their tool box. We ride on the backs of these people. The past year-and-a-half has been really great for us. Out goal isn’t to be the largest company, but to keep growing. And, you know, we are now providing content in 11 languages.”

We asked Gavin how he sees the industry these days.

“I’m seeing a lot less businesses failing,” he says. ”People seem to be a little smarter about Return On Investment and what will work. And they seem to doing more planning for content. In fact, we find that we are being called in earlier in the installation planning process than in the past.”

This entry was posted on Sunday, October 6th, 2013 at 12:18 @554 and is filed under DailyDOOH Update. You can follow any responses to this entry through the RSS 2.0 feed. You can leave a response, or trackback from your own site.