CNN Airport Network, offering on-the-go news and entertainment in the airport industry, has launched live streaming of its network at the Miami International Airport, making its content available throughout the entire airport on multiple devices via the Wi-Fi system.

CNN Airport Network will offer a live simulcast of its 24-hour network as well as Spanish-language content from CNN Latino, a Spanish language programming block airing in key Hispanic markets across the country.

Live streaming capabilities were built in conjunction with Advanced Wireless Group, the wireless provider for the Miami International Airport and 16 other premier U.S. airports. 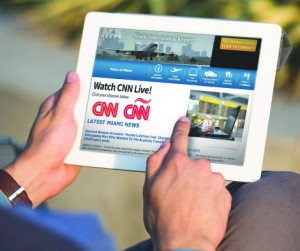 “CNN Airport Network is always evolving in order to provide marquee programming focused on what our airports and their passengers ask for, and the next logical step for our business was to extend our programming services to the vast number of travelers equipped with mobile devices, creating a unique opportunity to connect the tech-savvy air traveler with a diverse array of content – whenever and wherever,” says Debbie Cooper, president of CNN Airport Network. “Live streaming of CNN Airport Network is an important evolution of our product offering, and we are thrilled to partner with AWG and have Miami International Airport as our flagship deployment.”

“CNN Airport Network and Public Wi-Fi are both essential amenities in today’s airports and streaming content is a natural marriage of the two, which provides a major enhancement to the traveler experience,” says Scott Phillips, president and CEO of Advanced Wireless Group “Utilizing the current wireless infrastructure at MIA, we are excited to free passengers from the gate hold room allowing them to enjoy CNN Airport Network content on their mobile devices as they navigate through all public areas of the airport. And best of all, this provides yet another free Wi-Fi service to travelers at MIA.”

Launched in 1991, CNN Airport Network is the only live satellite-delivered airport programming service specifically designed for the busy traveler. CNN Airport Network is available in 50 major airports nationwide, and delivers live daily news from CNN and HLN, original travel features, entertainment programming from HBO, TBS, TNT and TCM, and live sporting events from premiere sports leagues such as the NFL, NBA, MLB and the NCAA Division I Men’s Basketball Championship.

Live streaming of CNN Airport Network will be offered to partner additional airports, with AWG providing streaming capabilities to those airport partners.

This entry was posted on Thursday, August 1st, 2013 at 09:59 @457 and is filed under DailyDOOH Update. You can follow any responses to this entry through the RSS 2.0 feed. You can leave a response, or trackback from your own site.