In a presentation I gave at the last Thought Leadership Summit), I analyzed what the ‘perfect’ pixel size should be for interactivity with large area, up-close displays. 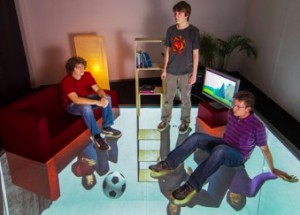 I included the scenario where pixels would be on the floor which raised a few eyebrows.

I’ve been writing about ‘pixels everywhere‘ for quite some time, but apparently some people think that floors are somewhere pixels ought NOT to be.

However, some researchers at the Hasso Plattner Institute in Germany think floors are perfectly good places for pixels. They’ve demonstrated an interactive floor project called GravitySpace, targeted at gaming and pictured above.

Intel even featured GravitySpace recently in their IQ by Intel blog – If you check out the GravitySpace site, you’ll immediately think of many, many, digital out-of-home  applications, Ed.

Here’s the way it works: The people in the picture are sitting on a thick piece of glass covered with a pressure sensitive film. Underneath the glass is a projector that projects upward. Sensors surrounding the pressure sensitive film determine where people and objects are in the room and a mirror image is composed and projected onto the floor.

But, of course, you could use those pixels for other purposes, too, not just for showing mirror images (as cool as that is).

Wayfinding is the most obvious. But also imagine walking from one area of a store to another where the floor could direct you to items on sale or to items related to something you already bought.

How close are they to using ‘perfect pixel’ sizes, you ask?  The GravitySpace prototype is 8 sq. metres and according to data on their website, has 12 megapixels. I’m guessing that they use 3 blended HD projectors, but it’s not clear. 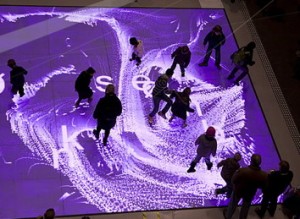 That implies that their pixels are in the range of 0.8 to 1 mm – a bit larger than the perfect size of 0.44 mm for floor pixels viewed by an average height North American female.

Note that this isn’t the first time people have experimented with interactive floors. In 2008, Phase7) installed ‘ØNSKEBRØNN’ in Sandnes Norway and in 2010 they showed it again at a Berlin train station (shown above).

It used wide-pitch LEDs, so the pixels were far larger than ‘perfect’ sized ones. Nevertheless, it does look like an amazing experience, though.

This entry was posted on Monday, August 12th, 2013 at 19:51 @869 and is filed under DailyDOOH Update. You can follow any responses to this entry through the RSS 2.0 feed. You can leave a response, or trackback from your own site.

One Response to “I’m Walking on Pixels, Woooah!”